that most of that sum of the world’s people will daily access some part of the Internet of Things, less than 60 months from today.

This data was introduced by www.IoTComplete.com’s principal, Jimmy Schaeffler, when he and four other panelists reached the Super Session stage at the National Associations of Broadcaster’s annual convention in Las Vegas, on Wednesday, April 15, 2015. 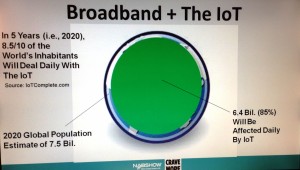 The streaming video of the Super Session, “Broadband and The Internet of Things: Realities and Myths,” can be viewed in its entirety at this link: http://t.co/OefXCnPYb2. The video also includes a wider definition during the first 10 minutes of the What, Where, Why, and Who that represent today’s – and tomorrow’s — Internet of Things.

An introduction of the panelists, MelRok CEO Paul Donahue, Wiley Rein’s Rob McDowell, Cisco’s Doug Webster, and xG Technology’s CEO George Schmitt by Jimmy Schaeffler, follows that introduction. The remaining 80 minutes of the Super Session are dedicated to some fascinating Q & A, as well as some of the same remarkable Q & A involving a good part of that large NAB Super Session audience.