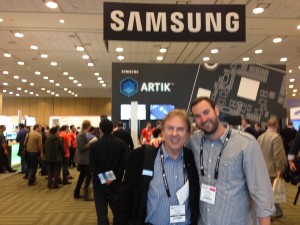 San Francisco’s multi-storied Moscone Center West opened its doors, and primed its escalators, for hundreds of visibly charged techies May 12-13, for the 2d annual IoTWorld conference and exhibition located a few blocks south of Market Street (See, http://iotworldevent.com/main-conference-program/). The two photos at right and below 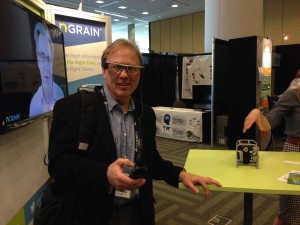 help describe the author’s day in The City, one wearing his first set of Virtual Reality Eyewear, the other cajoling with a good friend and former college roommate of the author’s two sons.

These IoT World highlights include the author’s focus for the visit, which was as the conference chairman for another Iot-related event, scheduled for the Santa Clara Convention Center (SCCC), October 26-29, 2015, called Connected Mobility 2015: The Future of Transportation, where mostly car and truck vehicle-change is headed (See, www.connectedmobilityusa.com).

Thus, displays and sessions that featured eMobility (e.g., the future of transportation in the realm of energy and efficiency…think Tesla), as well as iMobility (think interconnectivity and the Internet…something much closer to IoT), were visited and tracked.

The opening general session Tuesday, May 12, was specifically sponsored by Samsung, and featured several vendors with whom Samsung is now collaborating. Some highlights include:

Exhibits, Including Epson and NGrain

Once on the Exhibit floor, I was introduced to my first serious demonstration of virtual reality eyewear, this time in the form of glasses with picture-in-screen for use in technical learning, developed by a company called NGrain (which is a partner of Epson). See, http://www.ngrain.com/.The eyewear and the demo were impressive, and it is hard to see how such a device cannot be effective being involved in quite a few business and educational environments. See the photos below, for exhibits of both this eyewear device and a close family friend who also attended the IotWorld event on behalf of his San Francisco-based new tech company.

Indeed, the more I see…the more I like: This Internet of Things (IoT) stuff, well, it’s just amazing!